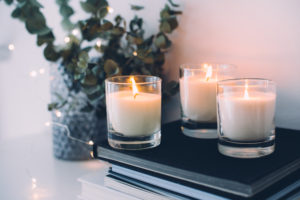 There is nothing quite like the first few days of autumn, and, if you’re anything like us, you’re already imagining  evenings snuggled under a blanket by the cosy light of….a heavily fragranced and super toxic fall-scented candle?

We’re not trying to pop your autumn-loving balloon, but here’s what you need to know about why many scented candles are hazardous to your health. And, because we love when our houses smell like cinnamon buns just as much as anyone, we’ve got some great ideas for non-toxic candles and nostalgic autumn smells at home

How are Scented Candles Made?

Though they seem safe, regular scented candles are a huge source of indoor air pollution and they put off chemicals that are considered just as dangerous as second-hand smoke. Paraffin is a petroleum waste product and has to be deodorised and chemically bleached before it can be made in to wax.

Most candles are made of paraffin wax, which creates highly toxic benzene and toluene when burned (both are known carcinogens). In fact, the toxins released from paraffin candles are the same as those found in diesel fuel fumes.

On top of that, many scented candles also have wicks that contain heavy metals like lead, and even a few hours of burning, they can create levels of airborne heavy metals which exceed recommended  acceptable limits.

Other toxic chemicals that may be present in the paraffin mixture and released through burning include: Acetone, Trichlorofluoromethane, Carbon Disulfide, 2-Butanone, Trichloroethane, Trichloroethene, Carbon Tetrachloride, Tetrachloroethene, Chlorobenzene, Ethylbenzene, Styrene, Xylene, Phenol, Cresol, Cyclopentene. Some of the toxins are found in other products such as paint, laquer and varnish removers– that’s potent and powerful stuff!

Petro-soot from paraffin candles gives off the same soot as the exhaust of a diesel engine, and is considered just as dangerous as second hand smoke, causing problems from headaches to lung cancer. Paraffin fumes have been found to cause tumors in the kidneys and liver of lab animals.”

Fortunately, there are some great alternatives to scented candles and after trying them, I realise I like the alternatives more.

One alternative is plant-based candles. Soy wax comes from a soybean, when you burn it you give a soy bean a tan. When you buy a soy wax candle you’re stimulating an environmentally friendly economy by utilising a natural, renewable resource. Speaking of soybeans – did you know that they’re vegetables and as such the soy wax is both  biodegradable  and water soluble?

Whilst being super great news for the environment, they’re also really good news for your house when you spill the hot wax – because it’s much easier to clean up. Heavily scented commercial candles may be good stress-relievers and atmosphere lifters- but they’re not necessarily good for you. Petroleum-based candles emit fumes that are slightly toxic – while soy wax candles don’t. It’s cleaner burning – no toxins, carcinogens or pollutants which mean it’s less likely to trigger allergies. Just nice knowing there is one less piece of decoration in your home slightly shortening your life span.

Paraffin candles burn hot and fast just like when you burn petrol (I’m genuinely hoping you don’t burn petrol) whilst soy wax candles burn a lot more evenly and slowly. So you’re getting more from your candle for longer with a lot less heat.

If you look at a normal candle jar, you’ll notice a ring of black soot. You may even notice these markings on the wall near the candle or other surfaces that you may have touched after the candle – along with all the other fun benefits of petroleum, when it burns it leaves a dark residue which is the burnt carbon. Because soy wax burns cleaner there is very little residue left behind, so naturally they emit less soot.

Because what’s the point of a scented candle, anyway?

Being derived from a natural source there isn’t a need to overcompensate with strong aromas in an effort to cover up chemical ones. A soy candle blends with essential oils a lot more effectively than paraffin wax, needing less to produce the same scent. Because they burn more slowly, the scent is gradually released; there won’t be that instant hit of a strong aroma nor will the smell ever be overpowering. For those who don’t like an overly perfumed fragrance soy wax scents infuse essential oils more gently and you’ll find that they permeate a room in a much more subtle and pleasant way.

Clean, healthy, environmentally sound, longer lasting and overall more pleasant – you need to be making the switch today. Join us and invite soy into your life.